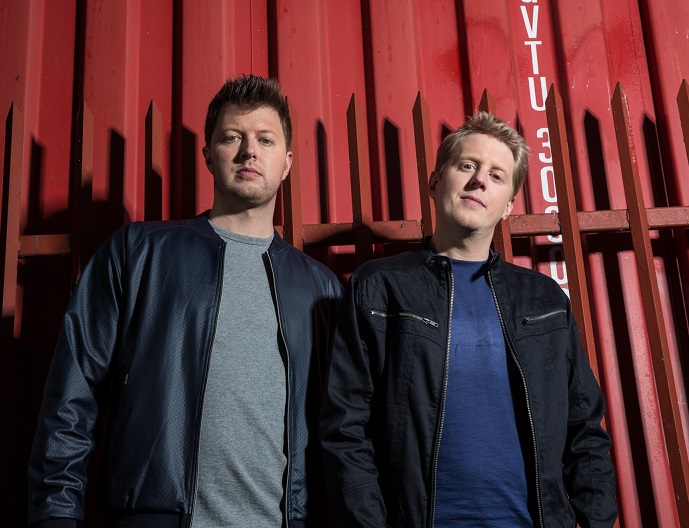 :: Announcement 3/6: We bring you the BIG news that DC BREAKS are joining our new team on their quest to educate and inspire you in the ways of Bass and Drum…

These guys made their way onto the widest range of playlists with their production careers going back more than fifteen years, the dynamic act’s club cuts have been rewound by the likes of DJ Friction and Andy C on a regular basis. Since signing to Ram Records, they’ve carved a reputation for delivering world class remixes for some of the biggest names in pop. Their work on singles by Paloma Faith, Lady Gaga, Lana del Rey, Tinie Tempah and others, as well as production for Example (a cut on the ‘Playing in the Shadows’ album) woke the pair up to the possibilities offered by vocalists. Still in the wake of their truly epic album ‘Different Breed’ out on Ram last year, they are busy as ever working on fresh material, so it’s a really exciting time to be having them involved with Sample Genie.

They have a highly diverse sound; well known for seminal anthems such as ‘Shaman’ and ‘Gambino’ but also equally adept at writing melodic, and more journey-full pieces such as ‘Everybody’ and the beautiful ‘Moving On’. There’s something about duo’s that seem to create the ideal environment for diversity; a meeting point of talents and thinking, which give rise to a varied as well as prolific output. So it comes with enormous pleasure and pride to be working with these guys over the coming year, and we know you’re going to love what they have in store for you!

Without meaning to sound strange, your music sounds very ‘musical’ ; are you musicians as well as producers?

Yes we are, or were! More and more the studio becomes the instrument, programming notes and chord sequences.  But we still often jam up ideas on piano and guitars for our more musical tracks, but then normally reprogram them in our DAW, or add a more chunky layer under the live recordings to beef it up.

How long have you been involved with D&B now?

Probably about 14 years! We started producing and DJing in Edinburgh around 2004.  Actually I’ve just checked Discogs and our first release was in 2003.  Blimey!.

How did you move into production, and what’s your current set-up?

We started in production actually at the same time as DJing.  They kind of went hand in hand, and computer processing had just got to the point where it was possible to not have to spend a fortune on hardware, and you could buy an affordable PC and gear up with plugins etc.  We spent a fortune on hardware anyway though!
We both began on Logic and have continued to use that as our main DAW. Dan has always had an analogue setup which changes year on year depending on what he’s bored with or stops using.  Currently there’s an HM2EQ Hammer and 2 x WARM AUDIO EQP-WAs , and a tube compressor.  But mainly it’s plugins, a smattering of UAD, a bunch of Waves, Fabfilters, iZotope, Eventide, Soundtoys, Sate Digital, NI etc.  Serum, Predator, Omnisphere and (not so much anymore) Massive have been our go to synths over the years, as well as a lot of re-sampling into Logic’s EXS24 and Kontakt.

Almost certainly, you have been getting feedback from Andy C for some time now, how important is feedback as a producer and how much has that helped you shape your sound over the years? And what kind of feedback does a DJ such as Andy give you?

In the beginning feedback is essential.  Hopefully people giving the feedback have the experience to hear any mistakes in either composition, arrangement, and mix downs.  Hopefully they have a much better listening environment to judge your tracks on and can give the right comments.  But often the most important factor has been that they’re DJing every weekend, and you’re not, so they can tell you how it working in the clubs etc, and if your drops needs to be bigger or whatever.  With Andy much of his feedback comes from how your tracks play out, if he’s having to tweak the EQ whilst Djing to get them to sound right, and how they feel compared to the tracks he’s mixing with, if there’s enough weight etc.
As you grow into your career and begin to play out more, you’re able to make lots of these judgements for yourself, and your tracks benefit directly from this, so you should find that there’s less need for major tweaks and feedback.  It’s still extremely helpful to have another pair of ears on your work though,  Always.

What are 3 of your favourite older DC Breaks tunes?

Do You Believe was a wicked track, always wanted to remake that actually! The Future was one we did as DJ Kryptik and DJ Samurai, but felt like a bit of a watershed moment in our production where we really got hold of some key elements in sound design and mix down. Similarly Shaman, that was a track we had written years before it got released, but we didn’t possess the production skills to make it bang.  When we had those skills, we came back to it and gave it the treatment it required.

What can our members look forward to learning from you in the tutorials you’ll be doing?

We’re planning on going into our bass design, which synths and processing we use to get interesting bass sounds, and then going in on how we mix the key elements of our tracks.