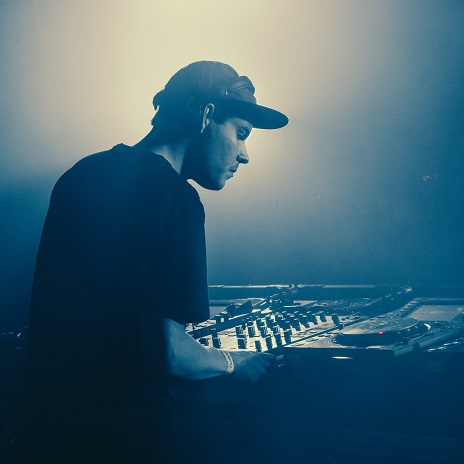 This next season is about exploring that blended intersection between styles. It’s about bringing in minds that think differently and who have a range of experiences to bring to the table: more established artists working alongside new, exciting power houses to give our members the full experience. Rizzle is an artist that we’ve been excited by for a little while now – he’s a serious talent – and in this new season he’s holding it down for the nu-school contingent.
His whole aesthetic is fresh, full of energy and has that smart, snappy production quality that we really love at SG. He confidently walks fresh lines, weaving driving liquid soul with more techy minimal slammers. Dazzling bass sound design and he’s well known in production circles for being a master of processing, as well as working with vocals.

He’s been putting music out for a few years now and has his work signed to Dispatch, Shogun, Symmetry, Vandal, Invisible, Overview, and like any in-demand producer he’s also been remixing like a fiend this last year. As his releases have been gaining in pace and significance over the years, killer EP’s and singles have paved the way to his debut LP which is coming very soon. When an artist is deep inside an album project we find it’s always a superb time to be working with them – peaking with a head full of inspired ideas and techniques.

We’ve heard some of the sample content already and rest assured this stuff is absolutely what we are about – impossible not to be inspired by the quality and feel of these starting blocks. And with tutorials… make no mistake, Rizzle will be bringing the latest knowledge!

We caught up with John for a few pre-season Q’s:

Welcome to the team John! It’s really cool to be working with you, especially as an artist we have been following for some time now. How has the last year been for you? And how has your creative flow been managed during all the FUD & weirdness? (feel free to be totally honest about that!)

Thanks! It’s really great to be onboard and big thanks for having me on this season. It’s definitely been a bit of a strange one this last year hasn’t it? I think i’d be lying if I said it hasn’t affected me at all, I’ve not felt the most inspired at times and definitely been spending a lot less time in the studio than I usually would. I think partly due to the lack of gigs and club feedback from new music, it’s definitely been a lot more difficult writing club style tunes as well. I’ve found myself making a lot more melodic, atmospheric and I guess more “listenable” stuff, stuff that works for me outside the club environment, so it’s definitely going to be interesting playing some of these bits out when I get the chance, hopefully soon!

What are you working on and what’s coming up (that you can tell us about!)?

I’ve been working on some bigger projects mainly and quite a big chunk of last year was taken up by finalising my album, which took a lot longer than I expected it would. I’ve also done 3 or 4 remixes and just finalised another EP which is coming out soon on a label I’ve wanted to work with for ages.

We’d regard your mixdowns as some of the nicest out there. Does this side of it come naturally to you? How long did it take you before you were mixing music to a decent level would you say?

It’s funny you say that, because for a long time I thought this was something I really struggled with, I was always searching for that little bit extra out of my mixdowns whether it was loudness or just cleanliness. It’s only recently I’ve been feeling a lot more confident with them, partly as well down to some great advice from Teebee, who really helped me get the most out of my album and showed me a few places where I was going wrong & could improve.

And creatively you always seem to nail the vibes. What is your creative process like, is there a pattern to how you come up with ideas and work them up into a finished track?

Thank you! I’m definitely a bit of a sucker to process, I pretty much always start with the drums, unless I have a very specific idea in mind for a track musically. When I’ve got a nice loop going I’ll see what sort of vibes I can lay down around that. If nothing works then I usually bin the idea, but if I feel like it’s heading somewhere I’ll just throw everything at it until something sticks. There’s definitely a wider process involved in working an idea into a full tune, mainly I just want to check off in my mind that the tune flows how I want it to, that it progresses enough and doesn’t get boring. Probably most importantly for me these days is that it sounds like a tune – not just an intro, a drop, a breakdown and then another drop. It all needs to be one cohesive bit of music that doesn’t sound like it’s been cobbled together out of different ideas.

What’s your current production set-up and what are your favourite pieces of software?

I’ve got a studio in a little box room at my house and I’ve been here for 7 years now. It’s nothing special but it’s a really nice space for me to work in. Hardware-wise I’m running a pretty outdated PC I’ve been meaning to update for ages now, a Korg Minilogue XD and a Strymon Bigsky reverb pedal. DAW-wise I’m on Ableton and have been for 3/4 years now. I’d say my fav pieces of software are probably Omnisphere and Serum, def the two most essential for me in my studio anyway !

In terms of tutorials, where would you say your strengths lie and what are you looking forward to sharing?

I’d say my strengths probably lie in bass design, musicality & vocal work/processing these days. Really looking forward to sharing some tips, tricks, processes and general methods of how I usually tend to work with that sort of stuff…

We’re REALLY stoked to be serving up our members with some brand new production samples. Can you give a hint of what they might be able to expect? And what do you look for (personally) in a top quality sample.

Absolutely! There’s a load of bass samples in there ranging from minimal to just outright lary and heavy, all of which would be really good for resampling. Loads of percussion loops which I think people will find really useful for adding that extra little bit of groove to things. Some really tasty arps and leads and some really lush pads, seriously, some of these atmosphere and pad samples I really had to think twice about including them in the pack… I could have easily written whole tunes with them there and then haha! It’s been a real fun project to work on as well and I’m really looking forward to hearing what people come up with. In terms of what I look for in a sample, it’s usually just a vibe!

In terms of Drum & Bass, can you give 5 tracks from other artists that you love to play out? ( Any era)

Sure! 5 tracks is really difficult to whittle down haha, but here’s some that I don’t think will ever leave my sets and I’m always drawing for:

Absolutely, really bumping these ones a lot recently:

Chaos in the CBD – Choral Castles
Calibre – Feeling Normal (Although I have to say, I could have included any track from this album!)
Skee Mask – Flyby Vfr

So you heard it first!
The new season of Sample Genie begins on 1.7.21. More announcements coming soon!