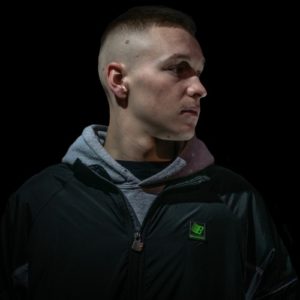 :: Announcement 2/6: Next up, rolling in on the good news wagon, we have the distinct pleasure of announcing Skantia as one of our new team members for the forthcoming season!

Charlie is one of those talents that has risen up quickly. He first caught our attention with his track ‘Slapstick’ from his EP entitled ‘Unorthodox’ released on Ram Records ulterior platform, ProgRam (with that whole EP being a total killer).

His sound captures a UK-Bass vibe through and through. With high technical production merits but yet somehow leaving the roughness and character pumping through its veins: it’s a special combination.

Over the last few years he’s put music out with the likes of Lifestyle Music, Nemesis Recordings, and Faceless Audio. But now signed to the mighty Ram Records it’s clear to see what kind of path he has ahead of him…

On this next season it’s about treading a line between the clinical, almost mathematical nature of production, and the more rugged, unrestrained & unfiltered side of it. We feel Charlie walks that line to perfection: he has a real sonic signature to his music, but at the same time keeps us guessing with what’s about to leave his studio next – a quality that is very special in any form of artistry.

So, it comes with the greatest pleasure to make this second announcement to you, and we hope this news gets you excited about the year ahead. You are in the company of a rising star….

We got the lowdown from Skantia in some pre-season questions…

You kind of sprang out of nowhere…how long have you been writing music for now?

I’ve been making tunes for about 5 years now I think.

I started off selling tickets for a local night, then built it up to DJ’ing for them. I then went on to make tunes as I saw that is the way to make a living out of it. Took me about 3 years to make music I was properly happy with.

Your music has a really rugged, unpolished, sound – but at the same time has a really modern production value and it’s super well engineered. Has this always been a style you wanted to go for, or has it come about more organically?

This style isn’t something I tried to go for, it just came along with my music taste. I’ve always been into real sounding drum kits, very fast paced and just outright mad sounding, rather than simple effective standout drums. It’s hard to get them to stick properly but I try the best I can.

What’s it been like getting signed to Ram and getting such DJ backing from Andy C?

It’s nice man, Ram were such a big influence on me from the likes of Frankee, Culture Shock etc. So was really cool to get noticed by them & yeah it’s nice to get the plays from Andy. For being the level he is, he’s extremely down to earth and loves supporting the new guys.

Just my laptop, a small Akai midi keyboard & some Yamaha HS7’s. Bit of sound treatment on the walls but nothing major.

What can our members expect to get from you in terms of sample inspiration, and what categories of the Sample Pack are you most excited to be working on??

I’m excited to get some really nice drums out there, basses are cool but drums for me are the ideal sample to look for. There’s going to be a wide variety from dancefloor sounding beats, to jungle & more rolling liquid, softer drums. With the bass:  some modulated samples along with some long note “horn” basses as that’s what I get requested for… Some nice intro stuff too like pads and cresendo’s..

In terms of studio tutorials what do you think you can bring to the team on this season and what are you excited to help people with / teach them – where do you think your strengths are?

Tutorial wise, I’ll work focus on how to get the poppy drums, how to have have lots going on without impeding on the mixdown too much. I would like to think my arrangements are quite nice,  obviously still lots to improve on, but i’ll have some advice there..

In terms of Drum & Bass, can you give 4 tracks from other artists that you love to play?

SO YOU HEARD IT FIRST! SAMPLE GENIE SEASON No.6 KICKS OF FROM 2 -7-20
More BIG announcements coming soon! 😀