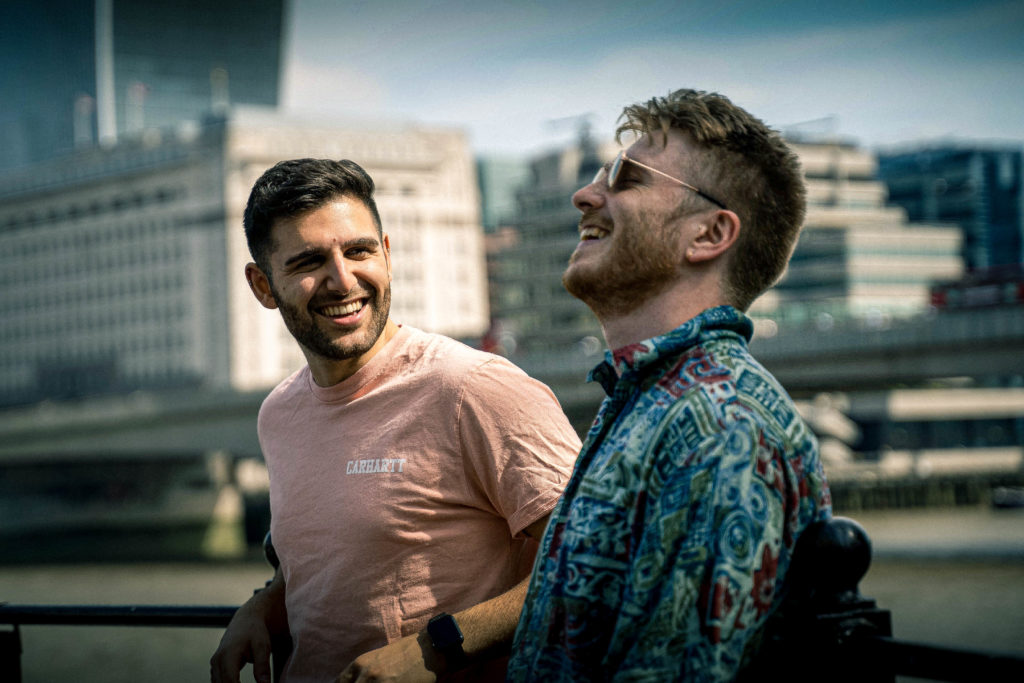 :: Announcement 4/6: Back once again with some more exciting news! Joining the previous announcements of Teebee, Skantia and Levela we have the pleasure of letting you know that the deadly duo Fade Black are on the new squad!

On this next run we have done something a little different in that one of the spots is being shared: Fade Black will be handling the tutorial department and the other half of this exciting announcement is that the mighty BUUNSHIN will be staying on as a sample maker! So between them all they have things covered 🙂 We did an article and Q&A with Buunshin for this current season and you can read that here.

Fade Black are a UK based duo, comprising of two artists Shyun (Andy) and Cruk (Nick). Both of these guys have some killer studio skills, evident in the sonic masterpieces they have been turning out over the last year. However, it’s not just their technical prowess that drew us to them; also the creative and musical dynamic to their tracks too. Two minds are often better than one, and these are just some of reasons we are incredibly happy to have them onboard in the context for teachers for this forthcoming season. We know a few of our members were asking about getting Fade Black involved, so voila! Your wish is our command….

Welcome to the team guys! It’s always nice to have a duo onboard as it brings a cool angle. You were of course successful solo artists before you joined forces, but what has it been like combining as FADE BLACK?

Andy: I think being a duo has given us a breath of fresh air more than anything. Enabled us to push harder and be more precise with the way we approach our production and writing. .

Nick: It’s been great, we knew that combining our efforts would pay off. We both really enjoy the writing process as a duo as it really helps to have someone else to help develop ideas, it’s much more efficient. It’s also much more fun to gig together!

Andy: I made a strange transition from being a classical musician into DnB, I was always massively into electronic music growing up, but it wasn’t until I went to college at around 17 that I really started dabbling in creating music. I think from then it took me a good 4 years till I was making things that I was somewhat happy with. The first tracks I got signed was my first EP to Kill Tomorrow Recordings (shout out to Thomas!)

Nick: I grew up playing music in bands and decided I wanted to try to make music on my own, it was around then I fell in love with Drum and Bass so that’s how I got into the scene. I’d been messing around making tunes since I was about 16 but didn’t get my first release until I was about 20 so really needed that time to get a sound that I liked. The first music I had signed was way back in 2013 on Synergist Recordings (shouts to Chris and Cliff) with a track called Deadweight, I’ve come a long way since then!

Your music has a super modern feel to it. Very Fresh. What would you say your influences have been from both within D&B and outside the genre too?

Andy: We are both musicians but come from very different backgrounds which is what creates our writing style. I’d say our influences come from all over the place, the precision approach to production and sound design is obviously inspired by the likes of Noisia, Mefjus, Phace, C&K, and the usual people at that calibre, but musically we’re definitely influenced by music far outside the realms of dnb.

Nick: When I was starting out it was Audio, Ed Rush & Optical and Noisia’s early work that got me into the heavy stuff. Outside of drum and bass I know both of our tastes are super diverse having both come from musical backgrounds. Growing up I listened to a lot of rock and blues, and later hip hop, jazz, metal, anything really.

What’s it been like getting signed to critical and getting such DJ backing from Kasra?

Andy: It’s amazing, everyone involved is so down to earth, feel very lucky to be a part of the critical family. Having Kasra’s support on releases is great, he gives us a lot of freedom to explore and be ourselves with our musical output and that works really well for us.

Nick: Working with Critical has been great, we both definitely feel like we’ve found a home. The label is run so well and it’s great being part of such an awesome roster of artists.

What’s your current studio set-up and how does this work around being a duo – do you have identical set-ups?

Andy: We have pretty identical set ups, powerhouse PCs plus a laptop each. We use Bitwig studio with the same identical software and plugins set up.

Nick: We use dropbox which is amazing for the most part. When I work on a project, it automatically updates on Andy’s computer and vice versa, so there is no faffing around with stems or anything like that. We also have a shared studio where we can work together to develop ideas we’ve started individually, or just jam on something new together. It’s pretty ideal for us at the moment.

Andy: The set up works perfectly for us while we’re apart. But it doesn’t beat the vibe when we’re together making music in the same room. I’d say that’s when the real Fade Black magic happens.

This year we have the good fortune of having you as part of the tutorial team… What do you feel are your strengths both individually and as a duo, and what area are perhaps really excited to share knowledge in?

Nick: I would say in Sound design and the intricacy of creating sounds, that’s always what has interested me most. We’re looking forward to showing you some of that in our tutorials.

Andy: I do enjoy the sound design side of things a lot and get stuck in making bass patches (although I tend to do this as I go where nick is a bit more organised about it), drums and the usual bits and pieces, but my strengths definitely lie in the writing side of things and get quite stuck into automating parameters till they’re just right . Generally when I do make a bass, Nick tends to take it to the next level and turns the one sound into many variations we can use to keep it interesting.

In terms of Drum & Bass, can you give 5 tracks in the last 2 years that have blown your mind?

SO YOU HEARD IT FIRST! SAMPLE GENIE SEASON No.6 KICKS OF FROM 2 -7-20
More BIG announcements coming soon! 😀